After scoring a goal in the 4-1 win of Bayern Munich against Lazio, Musiala became the second youngest player (17 years and 363 days old) to score in the Champions League’s knock-out stage, right behind Bojan Krkic (17 years and 217 days old). Additionally, he’s now the youngest English player to score in the Champions League. So what’s special about and this youngster and how he shows his talent to the world. Let’s check it out !!!

Musiala was born in Germany, but his family moved to England when he was seven years old. He spent four months in Southampton before moving to Chelsea. After that, Musiala attended Whitgift School – along with some other familiar Chelsea players: Callum Hudson-Odoi, Victor Moses and Bertrand Traore. Musiala debuted for Chelsea’s U18 team when he was just 15 years and 72 days old. In the summer of 2019, he joined Bayern Munich at the age of 16. In June 2020, he became the youngest Bayern player to appear in Bundesliga when Bayern Munich played against Freiburg. Three months later, he scored his first goals in Bundesliga against Schalke and set the record for Bayern’s youngest goalscorer.

Musiala played for the England U15 team and U16 team, he then made two appearances for the Germany U16 team. However, Musiala continued playing for England U17, and now he’s capped up to U21 level with the Three Lions and scored his first goal after just two games. Recently, he has chosen to represent Germany at the international level: Musiala will play for Germany next month against Iceland, Romania and Northern Macedonia. 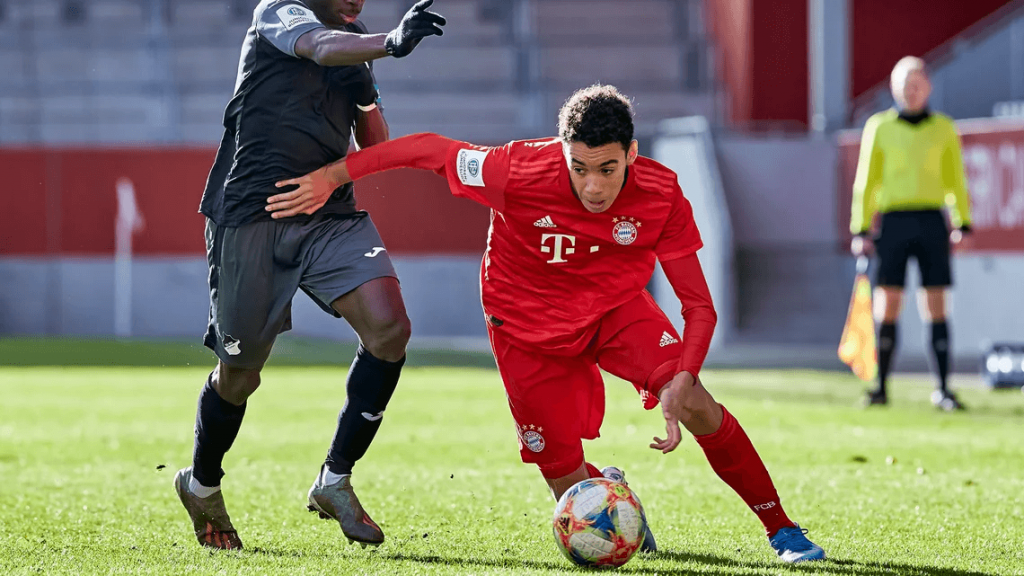 He mostly plays as the No.10 behind the striker, but he can play just as well at the No.9. Jamal is a right-footed player but his left foot is still a dangerous weapon if push comes to shove. He prides himself on his powerful shots as the super striker against Lazio last night. One of his recent best performances was against Atletico in the Champions League. As noted by Sid Lowe in The Guardian: “He completed 92% of his passes, but not because he limited himself to the risk-free option. The tackles he made were vital ones, too: long runs and well-timed interventions to make vital stops on Yannick Carrasco, Kieran Trippier and Marcos Llorente.” In this season, Musiala has so far appeared 27 times for Bayern Munich in all competitions, contributed 4 goals and many highlights. Because of this, he got more and more chances to get picked for the Bayern Munich starting eleven.

That’s all you may need to know about the rising star of Bavaria’s Tiger. This dude is certainly star material for both the country and the club. If you like this post, leave a like, follow our page and download TrophyRoom The Fantasy Football Game.