Get new free cards by completing daily and weekly quests. 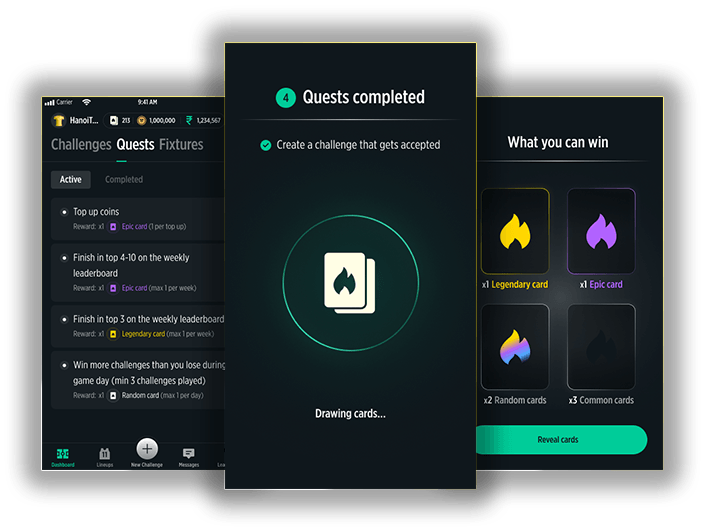 Big news buddy! We’ve just released Quests – a very cool new feature that will now replace the way free cards are handed out. Before you got a new random card for each won challenge, which has lead to seasoned players sitting on piles of cards while new users need to struggle way more to achieve the same.

In order to balance the game, we have divided cards into 4 different levels: Legendary, Epic, Rare and Common and also tweaked the rarity of each card level (Legendary being the most rare and common the most common, duh!). In addition you now get free cards by completing Quests – simple daily and weekly tasks. Check out the Quests below:

Create a challenge that gets accepted

1 legendary card per top up

Finish in top 3 on the weekly leaderboard

Finish in top 4-10 on the weekly leaderboard

Use your football knowledge to create the best possible lineup of real players from top football leagues.

Play Tactics Cards that add another level of strategy and excitement to the football game. But pick the right card at the right time!

Challenge a single friend or stranger or why not a whole group of friends? Challenge your friends with coins that can be used to buy new cards and other upgrades.

Join a vibrant community with user feedback as an integral part. From day one you’ll take part in The Football Council where you can cast your votes on what we should build next. It’s up to you!

TrophyRoom is an ambitious social football game and the sky is the limit! Join us on the adventure.

TrophyRoom is a free-to-play social fantasy football game for you to enjoy with friends and strangers during real world football matches.

Click on one of the badges below to download TrophyRoom: The Football Game to your iOS or Android device